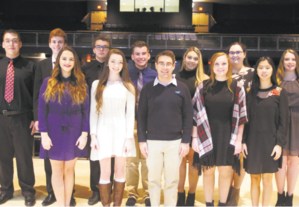 Twelve Connellsville Area High School students have been cast in the leading roles for The Phantom of the Opera, which opens March 1

Connellsville Area High School students are taking on a rehearsal schedule befitting a professional cast for their production of “The Phantom of the Opera.”

That’s fitting, given that all 12 students cast in lead roles are members of the high school chamber ensemble and four recently sang with the Pittsburgh Symphony.

“We met one of the people who played the phantom when we were in Pittsburgh,” said Jordyn Russell. “We had no idea we were doing ‘Phantom’ at that time.”

“He said to always keep singing and that singing had saved his life. He said it was one of the only things he was really good at in school. He said it helped pull him out of depression,” Russell said.

The students are rehearsing every day except Fridays and Sundays, preparing for the show which opens Thursday, March 1, and closes with a matinee Sunday, March 4. Most of the leads have been double-cast, said music teacher Michelle Harbaugh who is directing the show.

“Rehearsals are going very well. I teach wonderful students, and I am very proud of what they are doing,” Harbaugh said.

One of the exceptions is the role of the phantom, who will be portrayed by Parker Carte for all four performances.

“The show as a whole is pretty challenging, but the cast is up to it,” said Bobby McLuckey, who is playing the role of Firmin, one of the managers of the opera house in the musical.

Anthony Pouliot will be playing the role of Ubaldo Piangi, the lead tenor in the op- era company in the show-within-the-show.

“My part has some of the highest notes in the show,” Pouliot said.

The tenor is required to hit a high C, an octave above middle C, a note that is usually near the high end for altos, not tenors.

Another of the leads, John Crocetti, said the show is as challenging technically as it is for the performers.

“There are going to be some shocking things the audience is going to be surprised about and will really enjoy,” Crocetti said.

Chip Rowan, the community marketing manager for Armstrong, the local cable company, said Armstrong videographer Rick Fike is producing an advertisement for the Broadway musical showing some of the behind the scenes work going on as part of the company’s partial sponsorship of the event.

“It can come up on any of the channels that run on Armstrong,” Rowan said. “There is a possibility of 750 spots over a two-week period.”

Tickets for the show go on sale starting Tuesday, Feb. 6, and will be available 11 a.m. until 5 p.m. Tuesdays, Wednesdays and Thursdays and from 10 a.m. until noon Saturdays at the ticket office at the high school. Tickets paid by check may be purchased through the mail by sending a request to: Lynn Ritenour –– Musical Tickets, Connellsville Area Senior High School, 201 Falcon Drive, Connellsville, Pa. 15425. Tickets are $10 for the 7 p.m. Thursday, March 1, show and $12 for 7 p.m. Friday and Saturday, March 2-3 shows and the 2 p.m. Sunday, March 4, matinee. All mail order requests should be accompanied by a telephone number.

The box office will be open every day from 11 a.m. until 5 p.m. the week of the show and from noon until showtime the final Sunday.