CAHS podcast allows kids to speak out, tell their stories 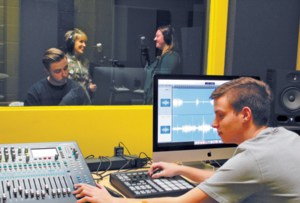 StrongKids is a new podcast through a collaboration with Connellsville Area High School and MaryMotivates.

Connellsville Area High School is full of StrongKids and a new podcast is giving them the avenue to speak out and tell their stories.

The podcast –– StrongKids –– is a partnership between the CAHS iMedia Center and MaryMotivates that allows students an outlet to share stories that can inspire others.

Jacob Kern is a senior and currently edits the podcast. While he hadn’t directly worked on a podcast before, he had some experience thanks to a friend’s recording studio. His story was also the first interview for the podcast.

Kern was diagnosed with cystic fibrosis as an infant. In his interview, he discussed his everyday life with the genetic disease that attacks his lungs. Cystic fibrosis can cause a buildup of thick mucus that can lead to infections, wheezing or shortness of breath. It also impacts digestion through the pancreas.

He’s open to talk about cystic fibrosis and how he’s dealt with it. In the episode, Kern talks about the effects of the disease such as what he called an “allergy cough” –– a persistent cough that comes frequently –– as well as difficulty breathing. But he’s played hockey and baseball despite CF, is a student intern for the iMedia Center and DJs with his best friend.

Mary Dreliszak, the founder of MaryMotivates and host of the podcast, said Kern’s story is one of living your best life despite the challenges.

Fellow senior Taylor Speeney told the story of her sister who died after a drug overdose in 2016.

“She made a mistake,” Speeney said. “We live with it. Someone doesn’t define someone else.”

Her family has moved forward, working to help others.

“At first, it was hush-hush,” Speeney said of how her family handled her sister’s addiction prior to her death. But after the funeral, things changed.

“It happened. There’s no sense hiding it,” she said. “Maybe it can save somebody else instead of burying them.”

“Taylor speaks with such wisdom and maturity,” Dreliszak said, adding that teens and adults can both learn from and be touched by her story.

Tristin Szabo told Speeney that he appreciated her openness and honesty in talking about her sister –– his father also died of an overdose. When he was 14, his mother was diagnosed with cancer.

Those experiences, along with day-today emotions, have fed into the music career he has been building toward since he was a toddler.

Szabo was raised by a single mother and musical family, he said. Starting at age two, he was learning guitar, moving onto piano in third grade and saxophone in fourth. By seventh and eighth grade, the now-junior was writing his own lyrics and rap music.

The lyrics started after his mother’s diagnosis, Szabo said, and his music is fueled by those kinds of emotions. It’s an outlet, he said, that he’s turned into something bigger.

Now, he’s opening for national acts in Pittsburgh –– Szabo opened for Huey Mac a year ago –– with multiple genres of music in his repertoire.

“Things pick up,” he said of the bookings. One call turned into two, then three.

His music, under the name Tristin Dare, is available on iTunes, Apple Music, Google Play, Spotify, Soundcloud and YouTube.

“He’s working tirelessly toward a goal,” Dreliszak said. “Others can do the same.” There are approximately 1,300 students at CAHS, and these are only three of them.

Adrianne Jordan-Egnot, the school’s library media specialist, said every one of the 1,300 students has a story.

“The kids can surprise you,” she said. “I have the best job in the world. They inspire me every day. It’s not just these kids, either –– it’s my entire day. The kids at Connellsville are awesome. You really see them in their best light.”

Dreliszak, she said, gets to know the student prior to the interview and talks to them about what they’re comfortable sharing. After the recording process, the student maintains full control of their story –– if they decide there’s something they’re not comfortable with, it can be removed.

For Kern, Speeney and Szabo, they’ve received from the project as much as they’ve given.

Kern said it’s important to make an effort to brighten someone’s day and spread positivity while Speeney said people need to be generous with one another. For Szabo, it’s about being kind as you can never really know the life of another person.

“We can’t let our differences segregate us,” he said. “It has to bring us together.”

Thus far, the podcast is available on Soundcloud, the MaryMotivates site as well as the iMedia Center site, which is accessible through the CAHS website. StrongKids is produced by the iMedia Center, including recording, post-production, the logo and intro music. More episodes, including the recordings of Speeney and Szabo’s stories, will be available in the future.